This last weekend we went to Bandon Oregon to see if we could catch some of the harvest. Two years ago we were there in the late summer and took a tour of a “Bog” and learned that they can be harvested different ways. One way is with a “scoop”, a device that runs along the vines and brushes the berries into the collecting end. Then there is the flooding method. This is the preferred method for many reasons, one of which is that only the “good” berries float, the bad ones sink and are not harvested. Harvest time is throughout October. Watching some videos of the local harvest was intriguing enough to make us want to go back in October sometime and watch. We were probably a week late as most of the bogs we saw were already harvested, so we didn’t get to see the actual harvest but did see a flooded bog and a fellow churning the vines with a machine that knocks the berries off of the vines and then they float. 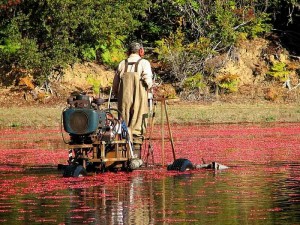 Then the workers “round them up” and either use a conveyor belt or a vacuum type hose to load them into the trucks. We couldn’t stay long enough to see that part of the harvest but I was excited enough just to find a bog that was right next to the road and could reach down and grab the berries. 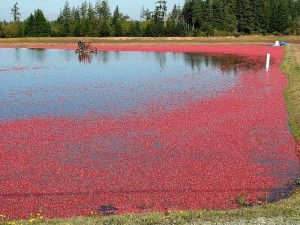 The berries are sorted and shipped to many places such as “Ocean Spray” for use in juice, canned berries, fresh berries etc. Reading up on cranberry facts you will find that they are one of the few truly native fruits of North America. Bandon has the perfect climate for them. Berries grown in the east coast and other places on the west coast are mostly white or pink in color, claiming about 80% of the juice we drink. The Bandon berries are prized for their rich red color. Yes those bright red berries you buy for Thanksgiving most likely came from Bandon! 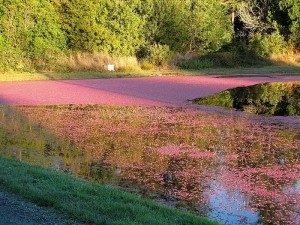